I had a really, truly fantastic summer. I did so much straight-up living. What I’m doing now, the writing and reflecting, always takes a back seat in the summer. I’ve grown to realize that’s okay. One thing I’m working on right now is not doing things just to do them, but to make the most of the jam-packed satisfying times when they present themselves and catch up on the to-do list (i.e. WRITE BLOG POST) in the quieter and more lonely times.

Two key elements of my summer were:

You may ask, “What camp?” There is no way to describe it. It’s just “the Camp.” It’s where I have spent every Sunday and at times other days of the week for most of my life. I have learned a lot about God there. Among other things, this summer I got to teach a hilarious bunch of three-year-olds about Jesus and his miracles of healing…what a great way to spend a week.

My cousin’s house borders the Camp and luckily her family is not averse to me using the kitchen for Pie-Making Purposes during the summer. The first Camp Pie of this past summer was Peachy Peach Butter Pie with Sour Cream Topping. What a fun thing to say. I think I went around the farmer’s market where we bought the ingredients saying “Peachy Peach Butter” and permutations such as “Peachy Peaches” basically nonstop. I think I also sang that “Moving to the country, gonna eat a lot of peaches” song for a while too. Just for good measure.

Making Peachy McPeach pie is a team effort. (We made two of them actually, cause there’s never enough pie to go around.) My best friend Maggie peeled and sliced the peaches like a champ.

In the meantime, I made the crust with one of my all-star helpers, little cousin Ava. She helped me make Sweet Corn Pie last year when she was so much littler! Ava is growing up into a very smart and sweet girl. And boy, does she love to bake. Making pie with Ava is becoming one of my favorite summer traditions. 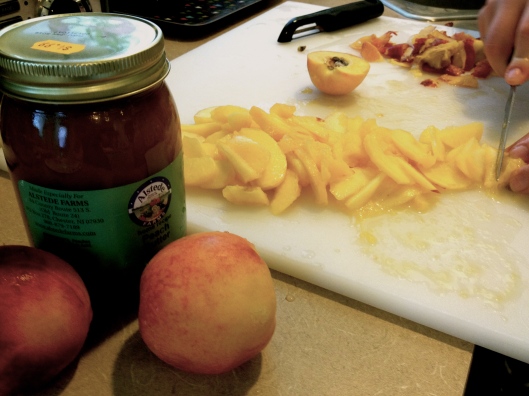 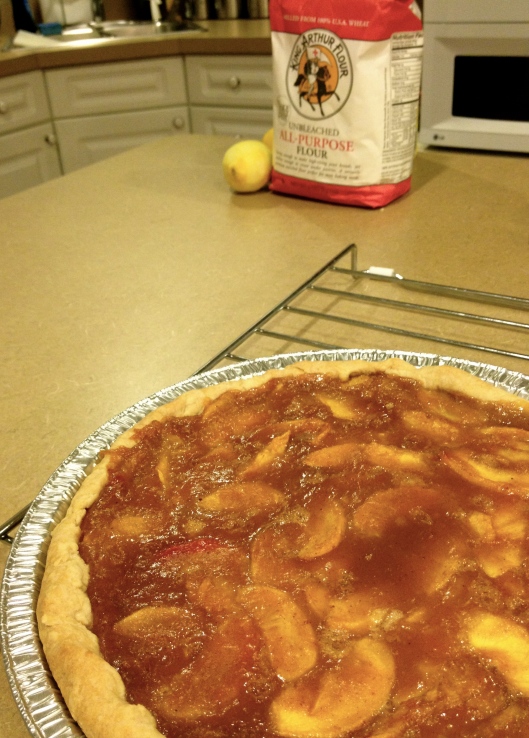 Exhibit A: The cooked pie in the topless state.

Exhibit B: Brad and Kathleen, some top quality peeps, with the topped-up version of Peachy Peach.