Gone, but not forgotten. Well, nearly forgotten. This pie eluded publicity for nearly seven months because the pictures of got removed from my phone in an untimely fashion, but here it is, another from the ranks of Pie. May I present to you…the Date-Walnut Freeform Pie.

Freeform pies are never the most picturesque, the most noble-looking or impressive types. But I think there’s a beauty to them all the same, and part of that beauty is the sheer ease of folding crust up and up and up and being done, no fussing with a pie dish. Just a plain cookie sheet is all you need. It’s very freeing (pun intentional) to know how to make a pie without a pie dish. To be honest, this pie was made in the comfort of my home, where I had a half-dozen pie plates around that I COULD have used, but it’s the principle of the thing. I’ve got pie making down to the point now where I think I could make a good pie with the only tools being as follows:

Any type of baking surface

(Don’t hold me to that, okay? Levi can vouch for the actual number of dishes I dirty when I make a pie. It’s more than five.)

Here are some of the other freeform pies I’ve made (1, 2). They’ve all been pretty yummy. But now let’s turn our attention to the pie at hand.

Dates. Dates are good. What I’ve learned about date desserts in my short life as a baker is that dates and dairy go well together. Dates + Dairy. That’s an equation to remember. If you’ve never had a date shake before, that’s a great reason to visit the California desert. Go to Palm Springs and get yo’self a date shake. Dates + Ice Cream. Also, I know something about Sticky Date Pudding, which I learned to make from some Australian friends of mine and have made from scratch at least a half-dozen times. That was like my go-to dessert that I would make for youth group hangouts or to bring to dinner at a friends’ house when I was an older teen. I just thought it was so delicious…gooey and rich and just a little sweet, covered with toffee sauce…oh hey, there’s that equation again. Dates + Butter + Cream = Yes.

Guess why this pie works? 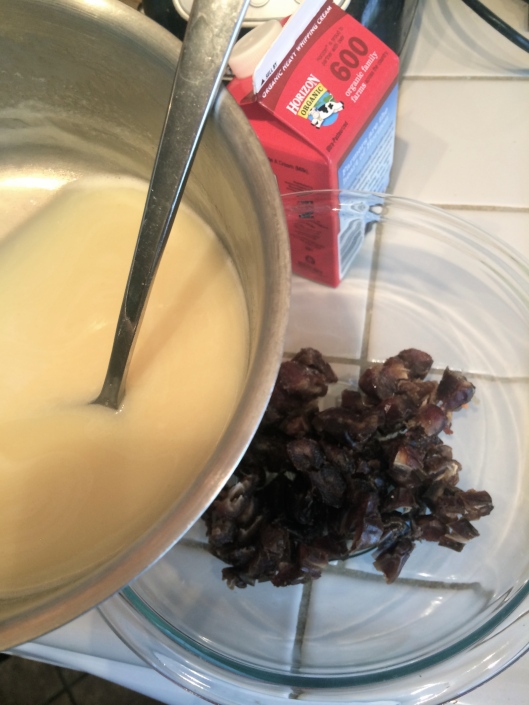 It’s all about that cream, that cream, that dairy. Without it, the date and walnut filling folded up inside a walnut pastry would just be too dry. But with it, success. Ken Haedrich describes this pie by saying, “Unabashedly rich and sweet, [it] has a single thick layer of dates and walnuts baked in a delectable walnut crust. The moisture comes from heavy cream, most of which is warmed and poured over the dates to soften them; the rest gets mixed in when the nuts are added to the filling.” Doesn’t that sound so fun? Don’t you want to try making this recipe now?! I thought so.

I made this pie for a women’s Bible class that was held at my home back in February. Oh, and that curried yellow carrot dip I made was yummy too…but you don’t get to hear about that here, since it’s not something circular that I can pass off as a pie. (I do sometimes wonder if anyone believes that Levi and I subsist off pies and maybe quiches, that I only bake and don’t cook, that I like sweet foods more than savory foods, etc. It’s fun and funny to think about. The answer to all of those musings is a decided no…but if you want to believe any of them, dear readers, I can’t deny you that right.)

Summer is upon us. In California, the only real difference is that you can go to the beach and sit on the sand and not actually freeze to death (though you’ll still do that if you attempt to venture into the water). The sun is a little sunnier, people are a little happier, and the end of the school year is in sight, meaning that there will be more time to bake lots and lots of pies.

If pie is the ultimate American dessert, than a berry pie is the ultimate American summer dessert. One weekend in May, Levi and I decided to preemptively celebrate the coming summer by having an Americana-steeped weekend. We spent time at the Simi Valley street fair, purchased and consumed some summery brews, grilled hamburgers on our barbeque. To go along with the theme, Levi decided that it would be a good idea to listen to country music on Pandora. (I’m still trying to figure out what possessed him.) And of course, I made a berry pie.

To make a freeform pie, you don’t need a pie pan. Just a foil-lined baking sheet will do. This pastry dough is sticky to the point of annoying, so the foil is a necessary step. The rolled out crust goes on the baking sheet, and then a sweet cream cheese mixture is spread over the center in a circle. Like so.

Then the berries get dumped in the middle. I used blueberries, raspberries, and blackberries…the more the berrier! Har har har.

Now for the fun part…rolling up the edges. You just fold in one section at a time and the dough forms pleats. I used a spatula for a little extra help. 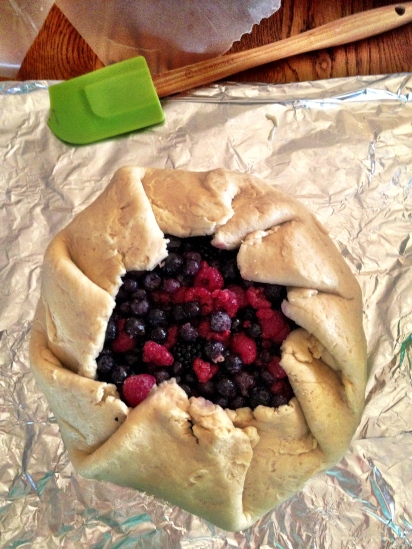 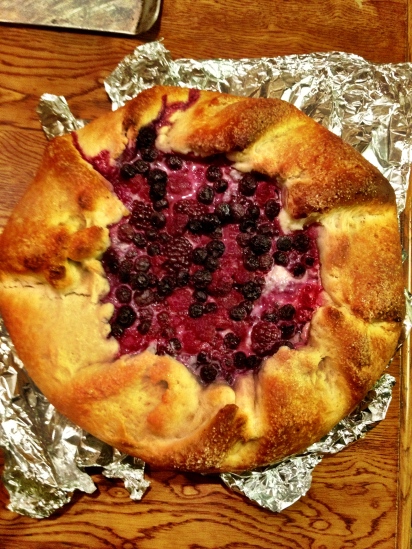 Bake until the crust is golden brown, top with vanilla ice cream OF COURSE, and share with friends. 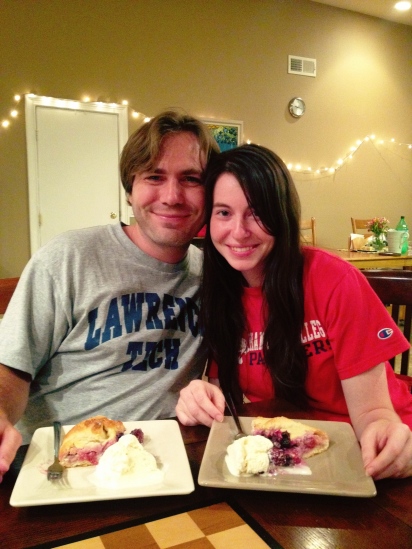