And for a good cause!

If you back up a few posts, you’ll find the flyer I posted prior to the auction. It went off pretty much without a hitch, I’d say, and we raised about $500 for the Glendale Relay for Life. Thanks so much to everyone who baked, bought, or just came and participated in some good, ol’ fashioned fun.

P.S. If you’re interested in seeing close-ups of the 5 pies I baked, move on over to the Pie Gallery page and check out pies 91-95. Which one would you have placed a bid on?

I am fortunate enough to teach at a school where pi is not merely celebrated for a day (3/14) but an entire week…and pi’s homonym pie gets a fair share of the party as well. Pi day? Are we still talking about that? Wasn’t that a month ago? Ah yes…what an astute observer you are! Well done. This post, like the one before it, is a relic from the past.

A wall of pi puns (although, let’s be honest, some of the youngest ones didn’t really get the concept and made “Camouflage Pi” and “Rainbow Pi” instead of, say, “Cutie Pi.” Ah well.)

On Thursday of Pi Week, families, students, and teachers bring in pie of all different types. We eat pie at recess and lunch and then the teachers have stomachaches AND classes of hyped-up children to teach for the afternoon. But we wouldn’t have it any other way. 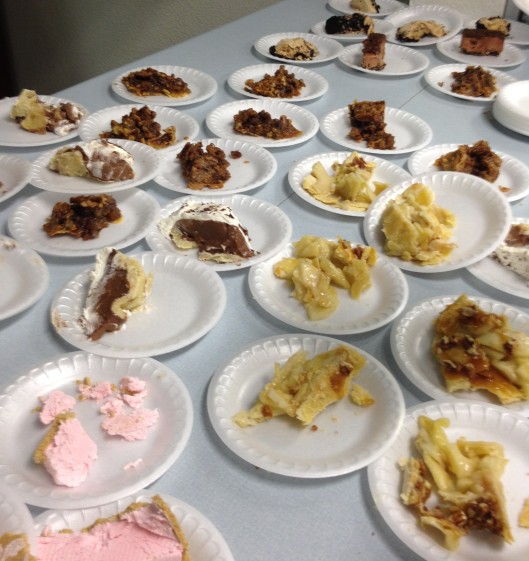 For this particular occasion, my own contribution was a Butterscotch Banana Cream Pie. The butterscotch flavor simply comes from using dark brown sugar instead of white when making the cream filling. Speaking of cream fillings, I have made quite a few creamy fillings over the stovetop at this point (whisk, whisk, whisk) and I still get a massive feeling of glee every time the consistency magically transforms, within seconds, from liquid to custard.

Here is the pie in a stage of assembly (and yes, that is a banana peel pi sign behind it, never fear.) Ken likes to put the bananas on top of the filling instead of inside the filling, as he says, “the bananas start to weep under the hot filling, leaving you with a weepy pie.” Who wants a weepy pie?

This pie has a vanilla wafer crumb crust. Since I practically have an anxiety attack every time I have to enter a store that isn’t called Trader Joe’s (jokes) I used the TJ’s Ultimate Vanilla Wafers. It’s not the cheapest way to make this crust, but I would definitely recommend…and then you get to sprinkle some more cookies on top once the whipped cream goes on there…oh yeah. It’s what you want. 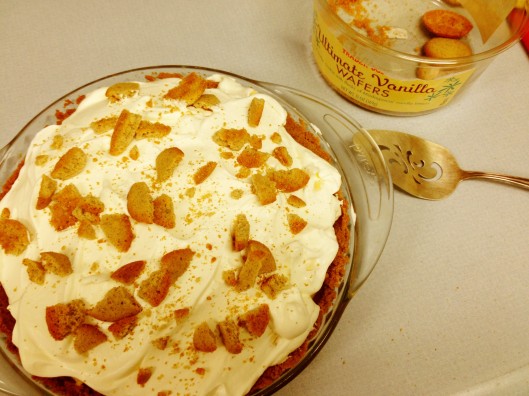 One of my teacher-friends (who had probably already sampled about six other pies) deemed this pie “refreshing,” a term that I must say I have never before heard applied to a banana cream pie. I think that she was on to something though. The pies in Ken’s cookbook generally run low on the sugar…he doesn’t oversweeten. I appreciate that. A little less sugar sometimes means a lot more enjoyable.

This is a tale of two pies. Pies whose mission took them far, far away from home, to the desert of Palm Springs.

Dessert in the desert.

But let’s not get ahead of ourselves! First we must introduce the main characters.

Shoofly Pie. This volunteer, made mainly with sugar and molasses, is ready to make the trek of his lifetime. (Thanks to my friend Sarah J. for the A-DORABLE whisk and sticky notes from my favorite store, Anthropologie!)

Oatmeal-Butterscotch Chip Cookie Pie. Rumor had it that this contender was an outstanding choice for bake sales…and to the bake sale he would go. (Thanks Amber…I’m putting your lovely Christmas gifts to good use. They’re also from my favorite store. “Lucky me!” says the gifts-person. See my post Love Language if you’re confused.)

The mission at hand: these pies were designated from birth to raise money for the small school I teach at. A lovely high school senior organized the bake sale in Palm Springs and sent me, the worried mother, this picture message when the pies arrived safely at their destination.

I regret never having tasted these pies. I regretted never having tasted the Oatmeal-Butterscotch pie so much that I immediately made a large batch of cookies with the leftover ingredients and consumed large quantities of them. What I don’t regret is that these two noble volunteers were able to make a small contribution to supporting an awesome group of kids.