Our good friend Phil spent a week with us in February. He’s the type of guy who never does anything halfheartedly, whether it’s becoming an overnight fan of the Utah Jazz basketball team or making an authentic Australian meal.

Once Phil and I had the idea that we must make pasties while he was visiting, the whole thing kind of snowballed.

Oh wait, take a step back. What’s a pasty? Take a second to educate yourself if you’re not sure. (They’re basically meat and vegetable handheld pies.) But if you’re going to make proper pasties, you need to be even more specific.

Things that I discovered while grocery shopping with Phil:

3. In a good and just world, pasties are accompanied by HP Sauce. Not surprisingly, the very American grocery store that we had visited to locate the swede did not stock HP sauce. There was clearly nothing for it but to make our own. Into the cart went the tomatoes.

So there we were, on a Monday night, chopping some steak and swede, mincing fresh rosemary, forming pastry, and simmering homemade HP sauce on the road. I made extra pastry, because savory pie followed by sweet pie is pretty much a perfect meal. As we were making enough food to feed a small army, it was luckily that we had six friends on our way over to share in the goodness. 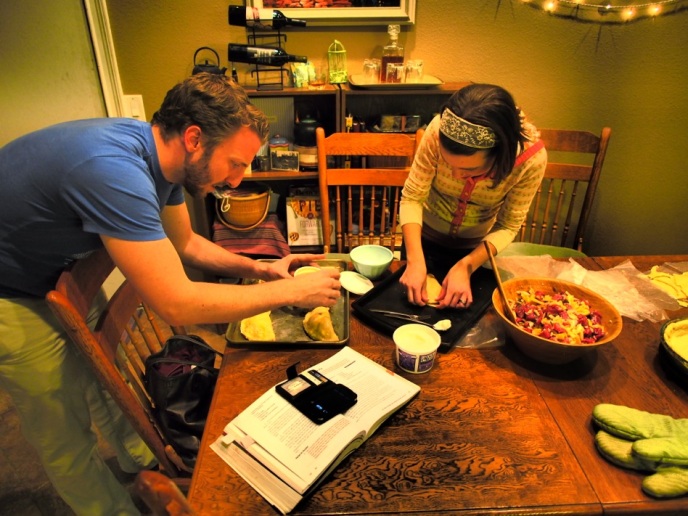 (Thanks to Phil for the above photo!)

Here are the recipes we used for the pasties and the sauce. To be fair, we more glanced at the recipe to establish the necessity of including the swede. I used Ken Haedrich’s Basic Flaky Pie Crust for the pastry and we included some herbs in our version, most notably fresh rosemary from a friend’s garden. The sauce was lip-smackingly good; I’d definitely make it again for any and all future steak situations.

An egg wash over the pasties never hurts. Nor does the accompaniment of a nice Aussie red. I can think of many things that would hurt far more than those.

And now, dessert. A very simple Lemon Chess Pie, which perhaps did not receive a completely thorough cooling before it was consumed, but was none the worse for its lingering warmth and just a tiny bit of runniness.

PS to Phil/File: Here is a little note I received from a certain young 2nd grader later that week that I thought you might enjoy.

2 thoughts on “Pertaining to Pasties…”