It’s really great when friends come to visit. It means that we can do fun things such as: run around San Francisco for a couple of days. 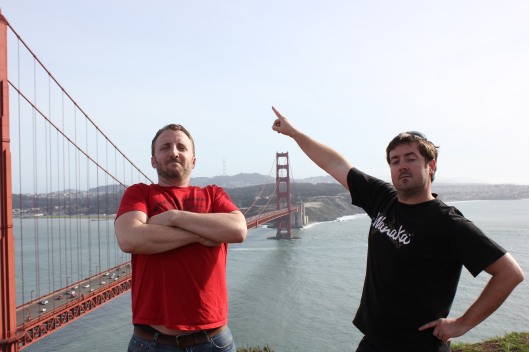 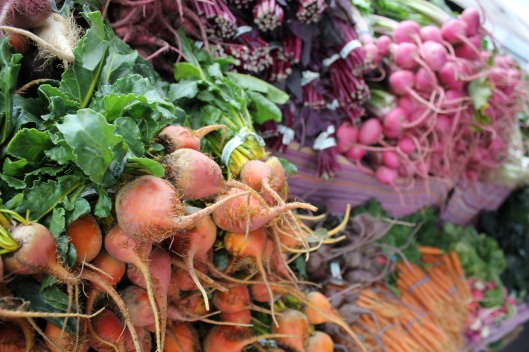 San Francisco’s a gorgeous city, no doubt, and we loved being there with Nathan and Nic. It’s not like we get to see them often–they live in Australia, after all. We just met Nic last year, when we met up and similarly ran around Salt Lake City (you can read that post, “Guilty Pleasures,” here. You should, it’s a good one.) Nathan we’ve known for quite a while now, and we still like him, so that’s good. People often ask me how come I have so many friends who live all over the world, and it does seem strange at first, I admit. But I know exactly why these friendships work and why they are so good; it has to do with Jesus.

If you ever want to know more, just ask. 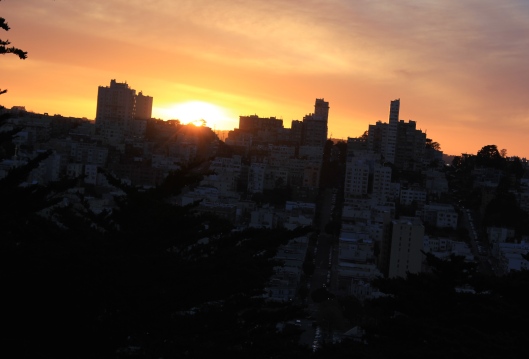 Whilst running around San Fran, Nic and I stumbled upon this delight of delights. A chocolate factory! I sagely decided to purchase some chocolate baking discs, as I thought that we would probably be able to make use of them in a pie. (I was right, as you’ll see later on.) Tcho is pronounced with a long O, by the way. For a while I was thinking “Tcha”, like what the first syllable of the word “chocolate” sounds like, but pretty sure that it’s “Tch-oh.” You can read about one of the coolest aspects of the company here.

Nic is quite a cook and baker. A fun fact is that she has also acquired a copy of the Pie cookbook (by way of me and another willing Aussie traveler) and has made a few of the recipes on her own over this past year. This is more of a feat when you take into account the fact that all the recipes are written using American measurements, so I applaud her for her efforts. We were excited to get back home and start pie-ing it up.

One night, Nic showed me how to make a chicken and mushroom pie. I’ve ranted on this before, but, truly, we Americans do not eat enough savory pies. Not even close to enough. Cause they are delicious times a million.

Someday I’m going to try making my own puff pastry. Or maybe that’s a lie. Either way, it didn’t happen on this particular night, but I have no qualms about store-bought puff pastry until they discover a less time-consuming way to make it at home. I think it takes approximately seventeen hours and pounds of butter. Ain’t nobody got time for that. 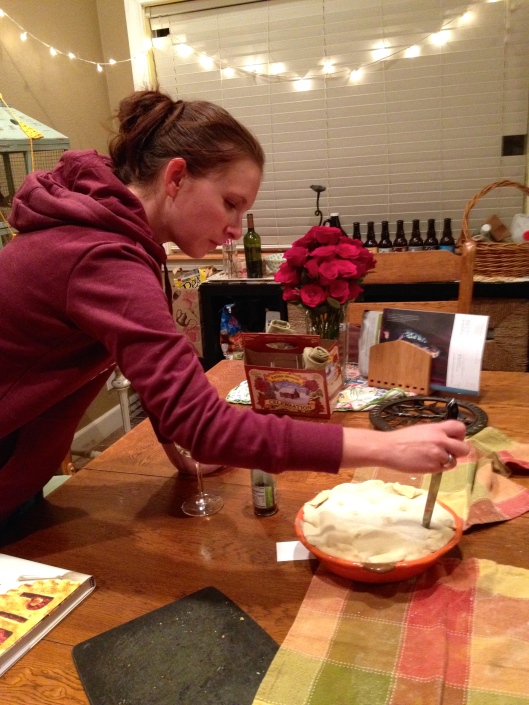 Here’s the finished product, all warm and flaky and lovely. Leave a comment if you’re interested in making a chicken and mushroom pie yourself and I just may be able to share the recipe.

Even Obi suddenly appeared at the table when he smelled the pie. What a little sneak. *Disclaimer: We do not actually feed our dog at the table, nor we do let him drink wine.*

Now let’s turn our attention to dessert. Remember those Tcho baking discs that came home with me from San Francisco? They made an excellent addition to Macadamia-Chocolate Chunk Pie. 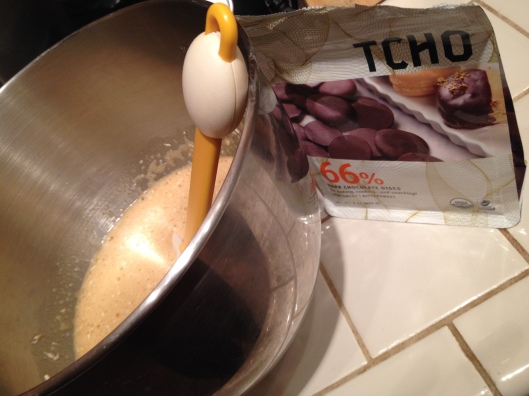 Can anyone tell me why macadamia nuts are so delicious? Is it just all that good fat? The rich, buttery flavor? I have no idea, but there is a lot of attempted self-restraint that goes on when I have an open bag of macadamias around. It’s a massive struggle that looks something like this:

Me: I only need one and a quarter cups of macadamia nuts for that recipe, and I bought two cups. I’ll just have one small handful.

Me: Well, just one more small handful. That’s fine. Then I’ll clip the bag and put it away.

Me: I still have enough left for the recipe, so who really cares? I’m going to take out the bag and have only a couple more. Then that’s IT! 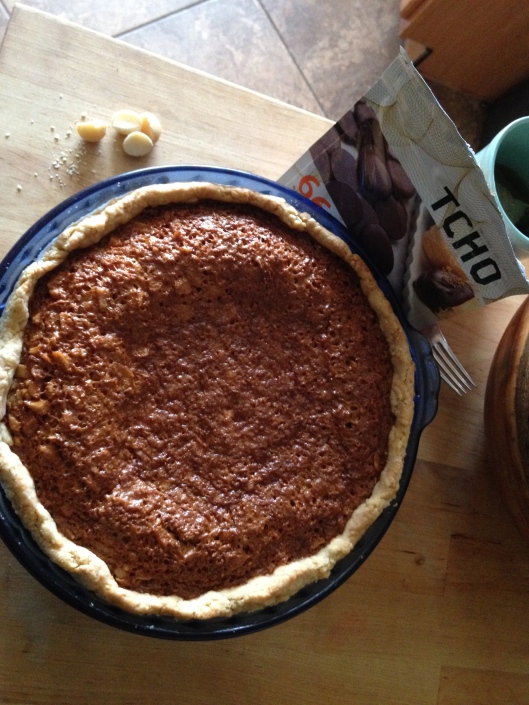 The end result of this pie has a texture that’s sort of half like a nut pie (pecan pie is what I’m sure we’re all the most familiar with), thanks to the egg/corn syrup/brown sugar base. It’s also half cookie-like, with lots of chopped macadamias, chocolate chunks, and coconut flakes. There are a lot of goodies in there. 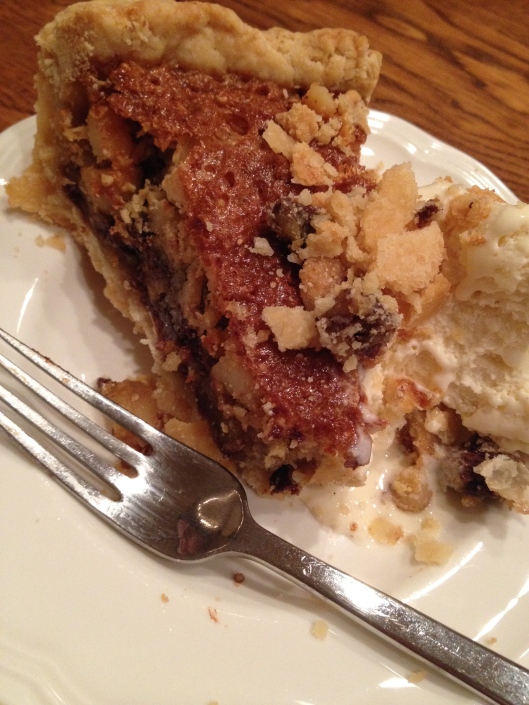 When friends come to visit, it’s really nice to cook and bake and enjoy each others’ company. And unintentionally wear lots of maroon and take Apple Photo Booth shots of yourselves, as it turns out. 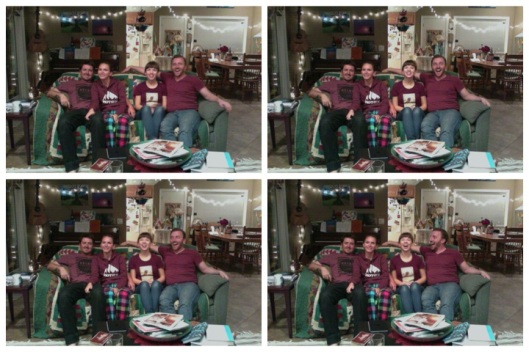 Hopefully it won’t be too long before we are reunited. Australia 2015? Sounds great to me.