February has been a good month for pies. Several new pies from the book have been tested for various occasions. I also baked up a couple Apple-Berry Pies of my own imagination to bring to the tech/warehouse department of my company, because I believe in bribery, I mean because I’m such a nice person. (No but for real. I needed to work out of the warehouse for several days and there is no better way to ensure a bunch of guys will run around finding you printer ink when you use it all up than feeding them pie first.) 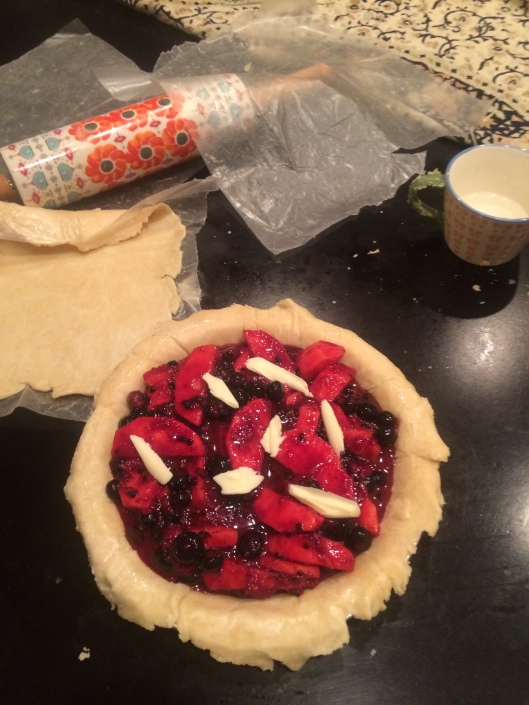 Okay, wow, I just now noticed the double smiley face. That is some serious sucking up. 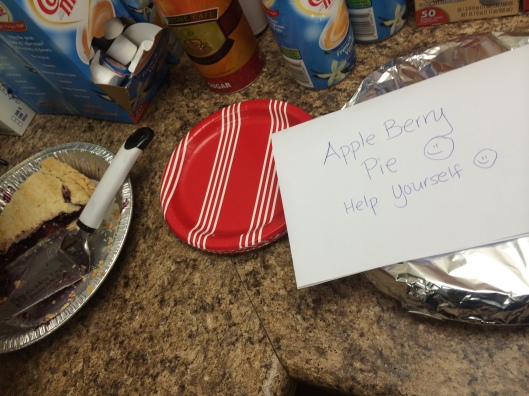 I’m also gearing up this week for my annual bake sale mini pie frenzy. (Just had horrible thought…am possibly out of half pint jars? Ran to garage to check on jar situation. Crisis averted.)

So yes…I will have PLENTY of 2015, February, current, hot-off-the-press pie stories for you. They’re coming! 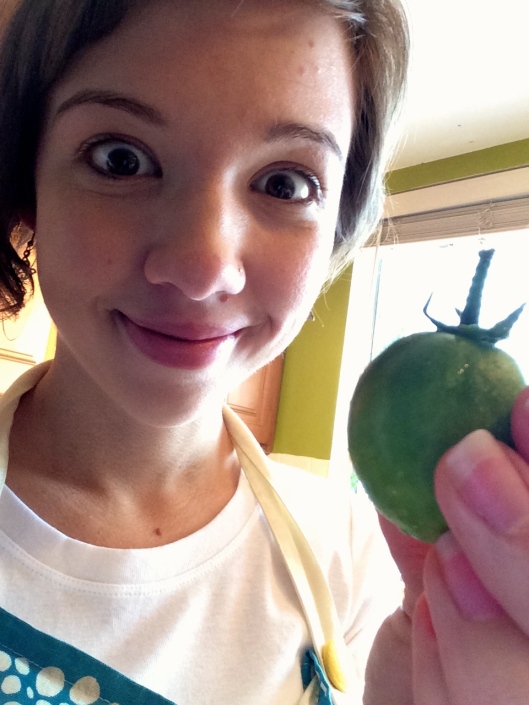 Green tomatoes. Ahhh yes. This Green Tomato Selfie harks back to December and to the Green Tomato-Mincemeat Pie I made with the last of the stragglers on our vines. This is the second green tomato pie I’ve made, the second that’s featured in Ken’s Pie cookbook, if you’ll recall. (If not, check out this post from a year ago, In which I Pride Myself On My Resourcefulness and Also Obi Nearly Poisons Himself.)

I felt that it was very fitting to christen this Christmas gift from another pi(e)-loving friend with a pie of a hue to match. (Thanks, Ren!) 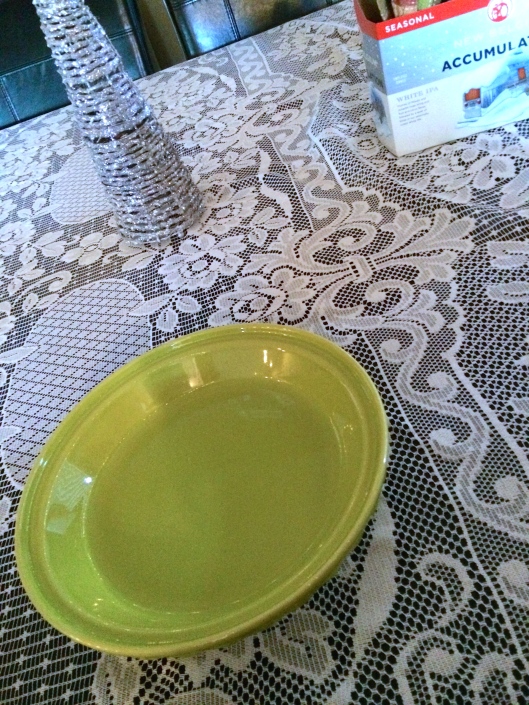 *Boy, is that ever a time-consuming activity. Be prepared for wrinkled fingers and passing waves of anger. 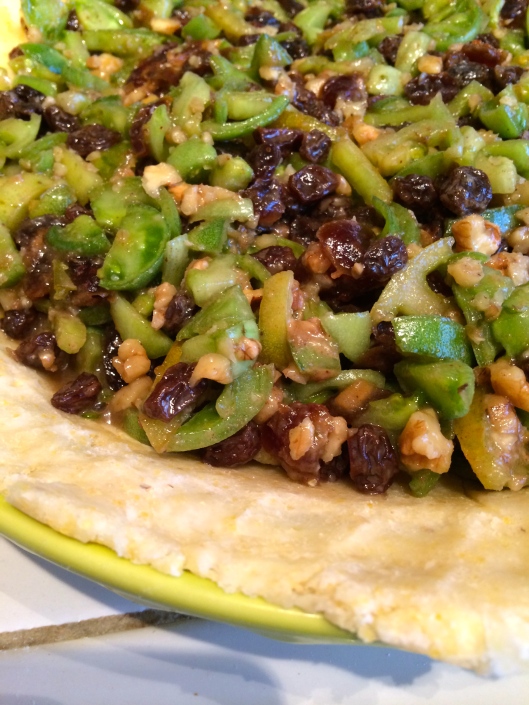 The crust used for this recipe is a cornmeal crust. Interestingly, but not surprisingly, cornmeal is paired with green tomatoes in Ken’s other recipe as well. It makes sense. When I think of green tomatoes, the first thing I think of is (no, not pie) delicious battered-in-cornmeal-and-fried green tomatoes with remoulade, such as some that I ate in New Orleans not a month ago. Yummmm. Clearly green tomatoes and cornmeal are just meant to be.

Cornmeal crusts mean that I get out these handy gadgets (thanks, Grandma Bonnie!) and place them on the outer rim of the crust before baking to protect from overbrowning. The rest of the pie does just fine without a shield, although you’ll probably still notice a little deeper of a color than you’ll get with a standard pastry. 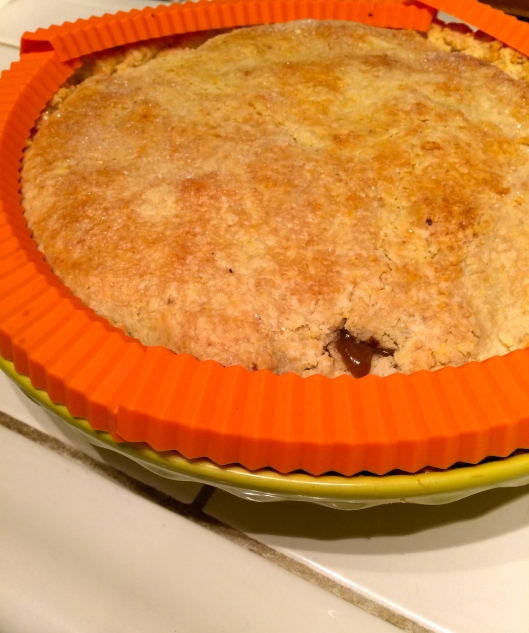 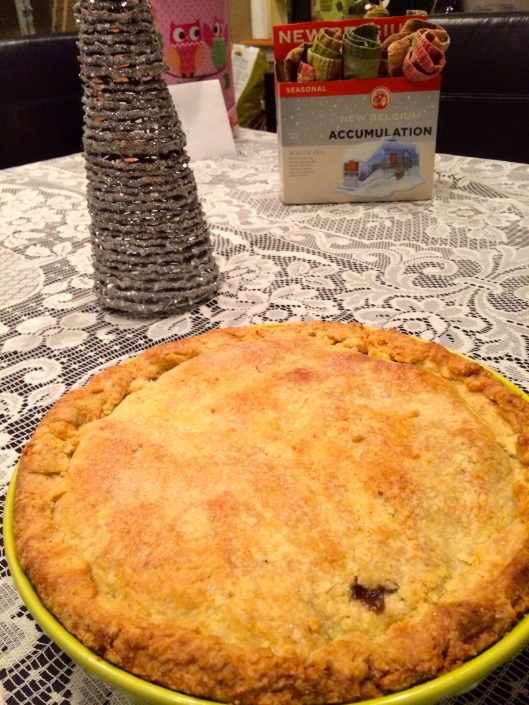 I really enjoy pictures of pie from this angle, looking right inside, as if you were about to reach in with a fork and just wedge off a little bite, making sure it contained both crust and filling. 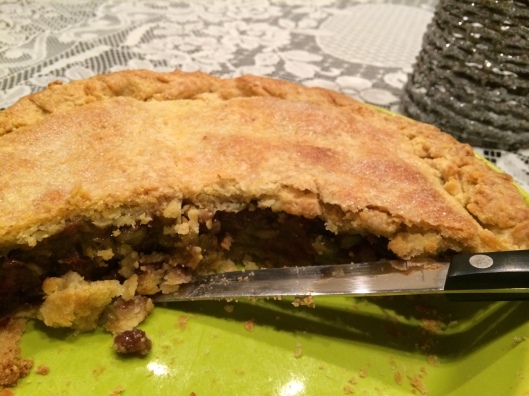 We were able to share this pie with many friends, including some Canadians who were not surprised at all by the contents of the filling and remarked that this was the way their family had always made mincemeat–with green tomatoes! 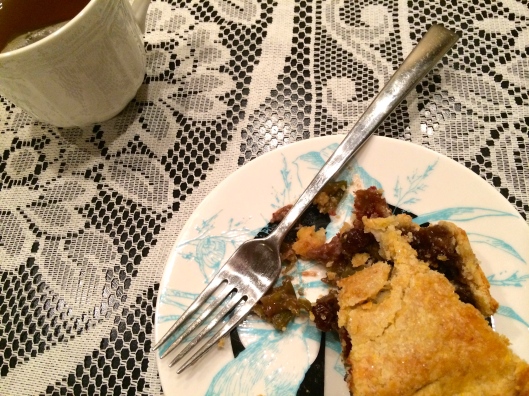